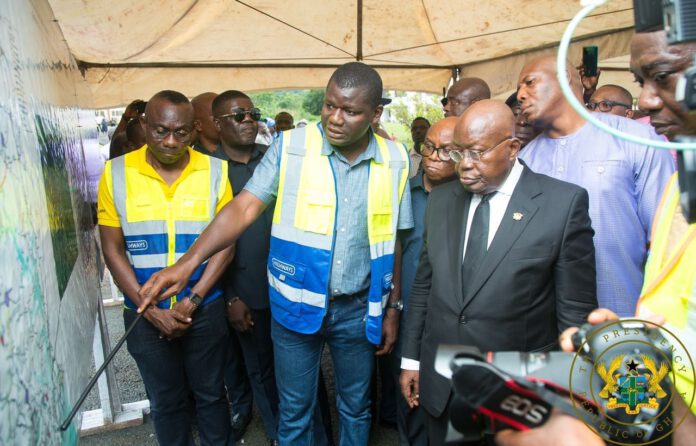 Ongoing construction of the Asikuma-Have section of the Eastern Corridor Road, which is scheduled to be finished in September 2023, has been inspected by President Nana Addo Dankwa Akufo-Addo on the 13th of September,2022.

This is one of the 58 road projects in the Volta region that have so far seen the completion of 129 kilometers.

The Volta Regional Director of the Ghana Highway Authority, Mr. Eric Dorsu, told the President on Monday that the Asikuma-Have section will be finished on schedule.

The Have-Hohoe segment of the Eastern Line has been finished for 41 of its 53 kilometers, according to Mr. Dorsu, who was speaking about other projects on the corridor.

He said that the 56-kilometer Jasikan-Dodo Pepeso portion as well as the 22-kilometer Hohoe to Jasikan section had both been finished and commissioned by Vice President Mahamudu Bawumia last week.

Additionally, work is consistently being done on the Nkwanta-Kpassa and Oti-Damongo portions.
Tema in the Greater Accra Region and Kulungugu in the Upper East Region are the starting points for the 696-kilometer stretch. It is the quickest way to get from the north to the south of the country.

Among the roads finished in the Volta Region are 21 kilometers of the asphaltic overlay on a few routes in the municipalities of Hohoe and Kpandu.

The first significant dual carriageway in the Volta Regional Capital, the dualization of Ho Main Road (10 km) between Sokode Gbogame and Civic Center, is currently 85% complete and is expected to be finished by the end of 2022.

The Eastern Corridor Road’s 39.3 km Asikuma Junction–Kpeve stretch is 26% finished, and completion is slated for December 2023.
It is anticipated to be finished earlier than predicted. Additionally, the contractor has been told to complete the 6 km gap between Kpeve and Have.
The government is also trying to start construction on the approach roads and Volivo Bridge. Beginning of construction is anticipated during the first quarter of 2023.

The 39.2 km Dufor-Adidome-Asikuma Junction and the 23.9 km Asutsuare Junction – Aveyime Roads, which will be used as approach roads to the Volivo Bridge, are both still in the tendering process.

The African Development Bank will provide funding for the project, and work is scheduled to start in January 2023.