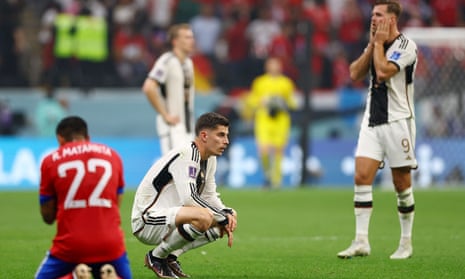 Germany have failed to qualify from the group stage of the 2022 World Cup after they did so in the 2018 World Cup.

Following their World Cup triumph in 2014, much was expected from them in the following edition(2018) but they failed to deliver and were kicked out from the group stage.

This year’s World Cup has proven to be no different as they were left scratching their heads after a shocking 2-1 defeat to Japan in their opening game.

In their second game against Spain, they managed to secure a draw which gave them a chance of progressing from the group stage but that was going to depend on results from the last round of matches.

In their final group game, they managed to secure a 4-2 victory against Costa Rica but they fell short of a place in the last 16 due to goal difference after staying level with Spain on 4 points.

This is the first time in the history of the four time world champions not to win in any their first two opening games.

Hansi Flick, coach of Germany says it’s the mistakes of the players that has caused their exit.

“We wanted to score three or four goals in the first half but then we made mistakes. If we had converted those chances, 16 of them. But the tournament was not decided today for us. We did not have any efficiency at this tournament and that is why we were eliminated”. – Hansi Flick said.

Japan staged another extraordinary World Cup comeback to reach the last 16, overcoming a stunned Spain side who were fortunate to join them in the knockout stage.

Black Stars deputy captain, Thomas Teye Partey has shrugged off criticisms that he doesn’t give his best performance for the national team.