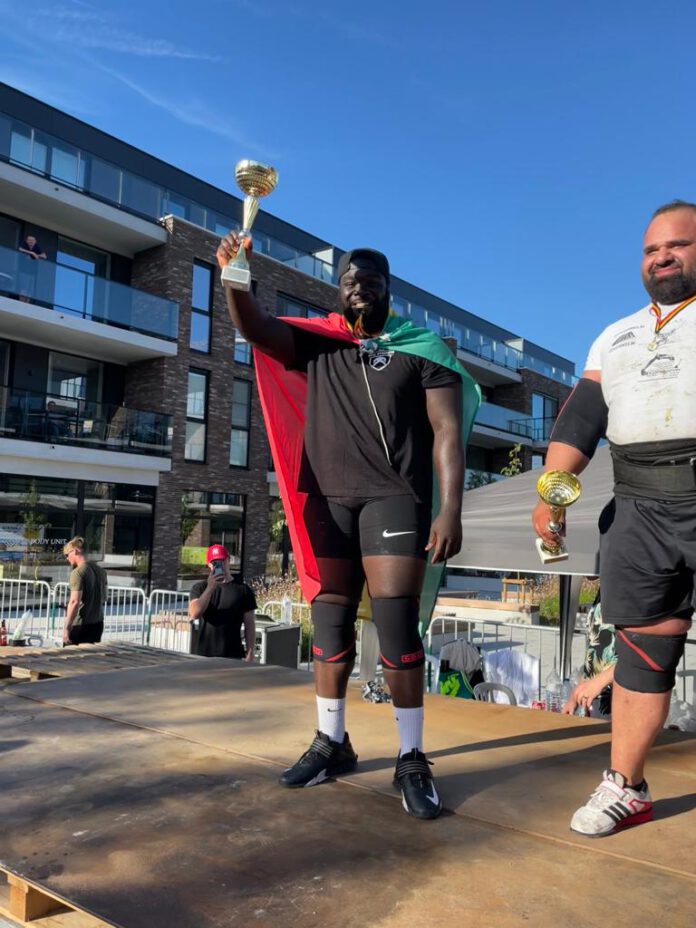 Fast-rising Ghanaian powerlifter, Evans Nana Ekow Aryee, popularly known as’ Evans the Hulk’, has once again made the country proud as he became the only African to mount the stage and emerge as the first runner-up in the just-ended Extreme Strongman Competition held in Belgium.

The competition took place over the weekend with spectacular display of strength, power and toughness. Extreme Strongman Competition is an annual championship organised in Belgium, with competitors from the Netherlands, Sweden, Norway and Belgium.

It is a multi-event competition that tests competitors in a number of different fields. This year’s competition was dubbed, “Extreme Strongman”.

Shortly after winning the silver trophy, Evans thanked God, his family and fans for chalking such a feat.

“God deserves the plaudits for this laurel. I am also grateful to my family, friends and supporters for their unflinching support throughout my period of preparation and the competition. Like towards the start of this competition, the training hasn’t been easy, but I kept on with the hope to deliver, I cannot thank you all enough. The experience is worthwhile ,” he stated.

Touching on his plans for the future, ‘Evan the Hulk’ disclosed that he would start preparing and training assiduously for other competitions in the not so distant future.

“My eyes are set on the gold and I am determined to win that going forward.”

I believe it is attainable through hard work and perseverance, especially Belgium’s Strongest  and Africa’s Strongest to be

held in South Africa  later this year where I hope to become an overall winner to put Ghana on the international sporting map with relation to powerlifting,” he assured.

According to him, he is looking forward to winning Africa’s  and Belgium’s Strongest in the future.

“Let’s face it, Strongman sports is taking over the world like a strong wind and we can’t help but to prepare and train for the change that is coming  I am ready to work the the impossible so we get to appreciate the sport in Ghana.

Amongst the events that were held at the competition include Car deadlift and Atlas stone run, both of which Evans came first. He also came third in the Sandbag loading, Truck pull and Overhead medley.

The Ghanaian-born athlete has over the years lifted high the flag of Ghana by leading competitions in Belgium and other European countries.

Aside that, he was adjudged Belgian deadlift record holder with a total of 338kg. He also competed in FIBO, one of the biggest fitness competitions in the world. Evans is tipped for greatness as he continues to challenge the status quo and put Ghana on the pedestal in international weightlifting competitions.