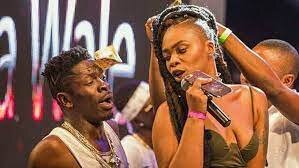 Prior to their breakup, Michy was a featured artist on Wale’s song “Low Tempo.”

The Shatta Movement’s leader wishes to resume collaboration with his baby mother.

In a Facebook post seen by this website, the self-proclaimed dancehall king of Africa expressed excitement for
a new collaboration with his baby mother, Shatta Michy.

The “On God” singer stated that he would pay this time in cash rather than in kind.
“This is how it should be done.
We built this “Symbol of hope” Thank you Now I can sleep Infact let’s do another song.

“This time I won’t pay you in kind but cash
Kudos to BHIM nation .”