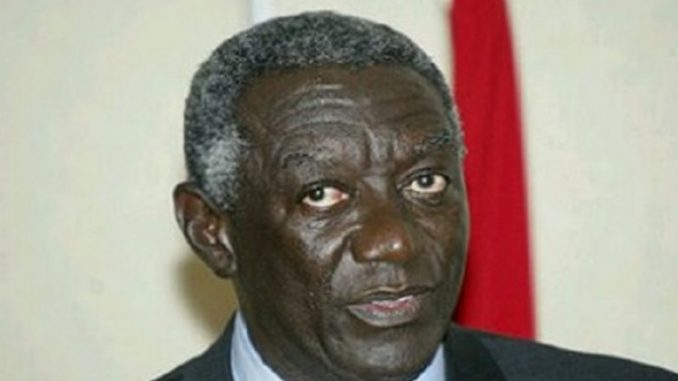 He indicated that he has a good relationship with all the names that have come up ahead of the contest and that he only wants the process to be “fair” and “un-engineered”.

According to the former president, what happened on Sunday during the Father’s Day soiree at the premises of Peduase Valley Resort and Hotel was his a harmless remark about his relationship with Dr Bawumia.

“There was nothing political about his remarks or even the occasion,” a press release from former President Kufuor’s office stated on Wednesday.

Signed by Senior Aide and Spokesman Dr Kwabena Osei-Adubofour, the press release bemoaned the fact that what happened “has been seriously misconstrued”.

The press release sought to explain what transpired at the event.

“Former President and Vice-President Dr Mahamudu Bawumia were both guests of honor at a Father’s Day soiree that was organised by the Peduase Valley Resort and Hotel last Sunday June 19th at the hotel premises.

The MC for the occasion was Mr Kwame Sefa-Kayi who stated that when the Vice-President was invited the day before, he was on assignment in the North and appeared unable to be present. He continued that when Dr Bawumia was told that former President Kufuor would also be in attendance, it is reported that he said “if it is Kufuor, then I will surely come”.

“In his remarks, the former President shared how touching it was to him to hear what the Vice President was reported to have said. The occasion being a Father’s Day event, President Kufuor commented on the father-son relationships between him and the MC, Kwame Sefa-Kayi, Mr Ibrahim Mahama, who was also there, and the Mamfehene who was also in attendance.

He also reminisced the close father-son relationship between him and Dr Bawumia and elaborated on how the Vice-president was only one month one day younger than his (Kufuor’s) own eldest child, John Addo Kufuor. For this reason, Mr Kufuor continued that he had always been close to the Vice-president and treated him like a true son.”

The release underscored the expectation of three-time flagbearer of the NPP for a “fair” selection of the party’s next flagbearer.

“This should be devoid of coercion and machinations so that the eventual selected nominee, coming out of the uncompromising freewill of the voting delegates, can easily command the support and respect of all party faithfuls, and indeed, other Ghanaians sympathetic to our cause, towards ‘breaking the eight‘.”