“I Did Only Liposuction” – Nana Ama McBrown Affirms 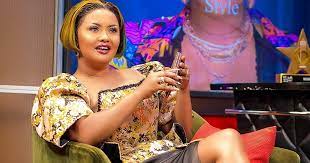 and for her looks.

This was after many people have accused and were lamenting the fact that, she did some work on her body.

According to her, she tried her best to have a good diet to make her look good and have a good shape but nothing seems to work.

Thus, she decided to visit the hospital for a check-up and HER Doctor suggested Liposuction as an option for her.

who did the same to improve their body shape.

She also explained that liposuction is used to remove fat from areas of the body that haven’t responded to diet and exercise, such as the:

“I did liposuction for myself,” she said.

On the show, she further iterated that, she only did Lippo and did not touch her Tommy and buttocks.

Moreover, she also said she got the right to do anything to make her look good but frankly speaking, she affirm she only did Lippo.

” The Work I am doing demands me to have a good body,” she said.

BACKGROUND OF WHAT IS LIPOSUCTION.

from specific areas of the body, such as the abdomen, hips, thighs,

buttocks, arms, or neck. Liposuction also shapes (contours) these areas. Other names for liposuction include lipoplasty and body contouring.

weight through diet and exercise or through bariatric procedures — such as gastric bypass surgery — than you would with liposuction.

You may be a candidate for liposuction if you have too much body fat in specific spots but otherwise have stable body weight.

The area under the chin that can be treated with liposuction

Liposuction under chinOpen pop-up dialog boxAreas on the abdomen, chest, back, legs, and arms that can be treated with liposuction

Liposuction is used to remove fat from areas of the body that haven’t responded to diet and exercise, such as the:

In addition, liposuction can sometimes be used for breast reduction or treatment of gynecomastia.

When you gain weight, fat cells increase in size and volume. In turn, liposuction reduces the number of fat cells in a specific area.

The amount of fat removed depends on the appearance of the area and the volume of fat. The resulting contour changes are generally permanent — as long

as your weight remains stable.

After liposuction, the skin molds itself to the new contours of the treated areas. If you have good skin tone and elasticity, the skin is likely to

appear smooth. If your skin is thin with poor elasticity, however, the skin in the treated areas may appear loose.

To be a candidate for liposuction, you must be in good health without conditions that could complicate surgery — such as restricted blood flow,