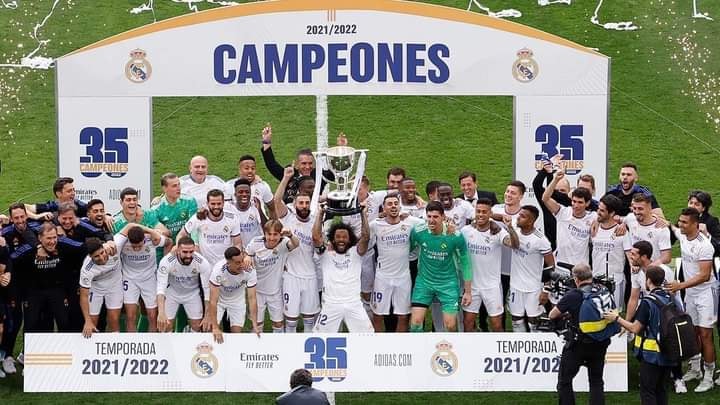 Real Madrid Club de Fútbol, commonly referred to as Real Madrid, a Spanish professional football club based in Madrid has been crowned 2021-2022 La Liga champions after beating Espanyol on Saturday April 30, 2022.Real Madrid was not only the best team in the Spanish football this season, but also the most consistent one.The fact that clinching the title was only a matter of time after the last few

weeks from both Barcelona and Sevilla should not take away the credit Madrid deservedly earned this season. Los Blancos seemed to be kicking off a transition season where they had to build a new defensive line with Militao and Alaba. Carlo Ancelotti knew how to get the best out of the squad he was given and deserves credit for the immense leap taken by Vinicius Junior this season.With this title, Ancelotti

becomes one of the most successful coaches in European football history, having won domestic league titles in Spain, England, Germany, France and Italy. Winning La Liga, the Premier League, the Serie A, the Bundesliga and the Ligue 1 is not easy and Ancelotti did it, so while he’s not known for being a tactical genius, he surely deserves credit for his whole career.