“The President can lie without any respect” – Hon Joseph Yamin 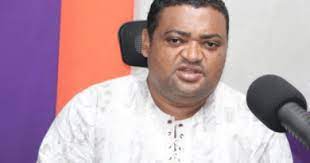 Hon Joseph Yamin, the former Deputy Minister, of the Ashanti region says the President (His excellency Nana Addo) can tell lies without even taking into consideration the people he is governing.

Hon. Joseph Yamin stated this during a discussion on Radio Gold on the 8th of July, 2022.

He says the factories and industries that were owned by these individuals were not even established to even employ citizens to work.

Speaking there, His Actions were tricks to manipulate the people to get his way as President.

He further iterated that even though Mahama’s era was a bit hard, it was the core initiative of the NDC to make Ghana a better place in the next four years, but this NPP government has mishandled the state’s economy.