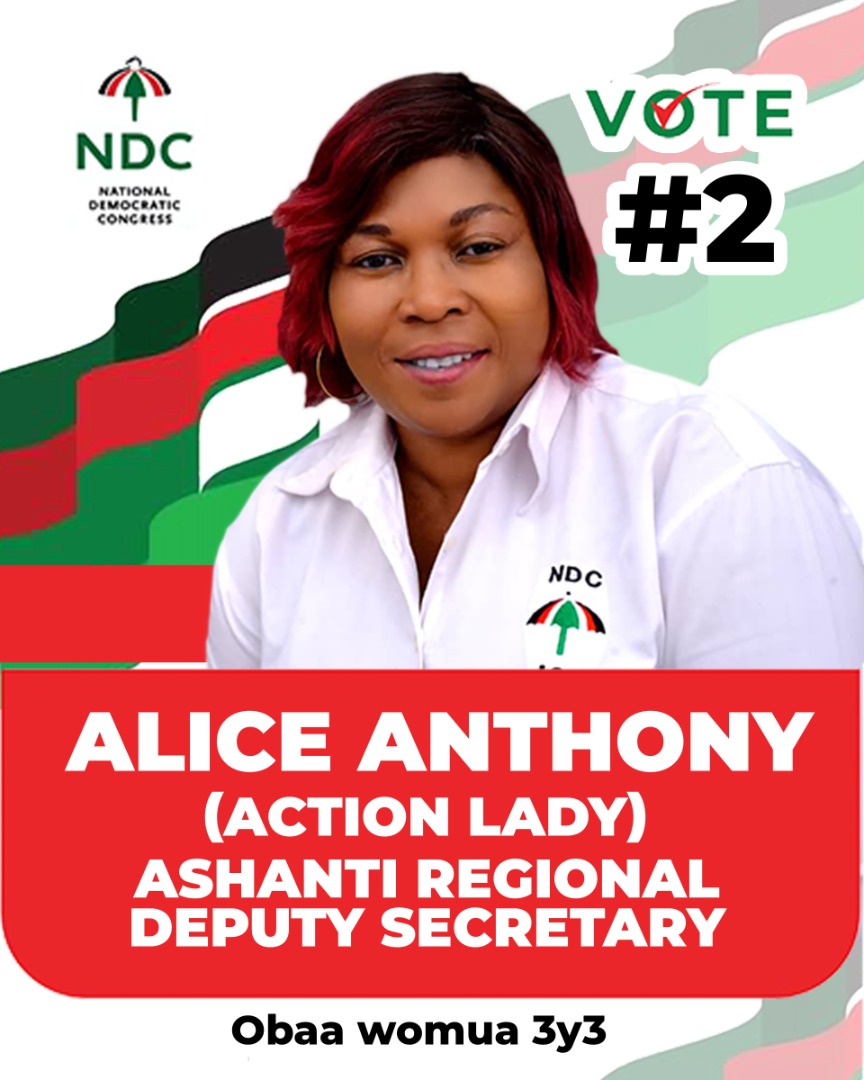 NDC Ashanti Regional Delegates have fully padded and unflinchingly supported Madam Alice Anthony, popularly known in the circles of politics as “Action Lady,” as the next Deputy Ashanti Regional Secretary for the biggest opposition party, the NDC.

She was described as the game-changer in the political landscape of the Ashanti region for her track record in working for the party.

The indigenes of Ashanti’s regional NDC chanted that indeed the dawn has broken and the action lady has come!

The main opposition party NDC in the Ashanti region has broken the gender barrier and tipped madam Alice Anthony an accomplished woman as the next deputy Ashanti regional Secretary of NDC.

Per the records, this is the first time in the history of the NDC in the Ashanti Region that a lady is contesting for the slot of deputy secretary. She is not just a lady but one who has risen through the ranks and file of the party and has experience in politics.

“Let there be gender Equality. Let’s support women in politics”

According to Ashanti Region NDC, madam Alice Anthony’s achievements in politics are unparalleled and will be chronicled throughout the coming days.

She is so astute, accomplished, loyal, honest, of high integrity, committed, intelligent, results-oriented, focused, decisive, forthright, a leader, caring, empathetic, fun, and inspiring to lead the NDC in the Ashanti region as the next regional deputy secretary.

“We, the NDC women and men in the Ashanti region, stand solidly behind you. May the great and grand architect of the universe guide and protect you as you are crowned the next Ashanti regional deputy secretary.

Ms. Alice admonished the umbrella fraternity especially the party’s delegates to vote for competency and committed party officers in tomorrow’s internal contest of the party because she is readily ready to serve the party for victory in 2024.

She stated that vote buying or elections infested with cash in the electoral process breed fertile grounds for bad officers to find themselves in the party, which makes it cumbersome for every Democratic party to secure a smooth victory.

She appealed to delegates to eschew such practices and vote for candidates like herself who can do the job and bring back power to the party since the election of 2024.

She has worked with the Ashanti Regional Elections Directorate for ten years.